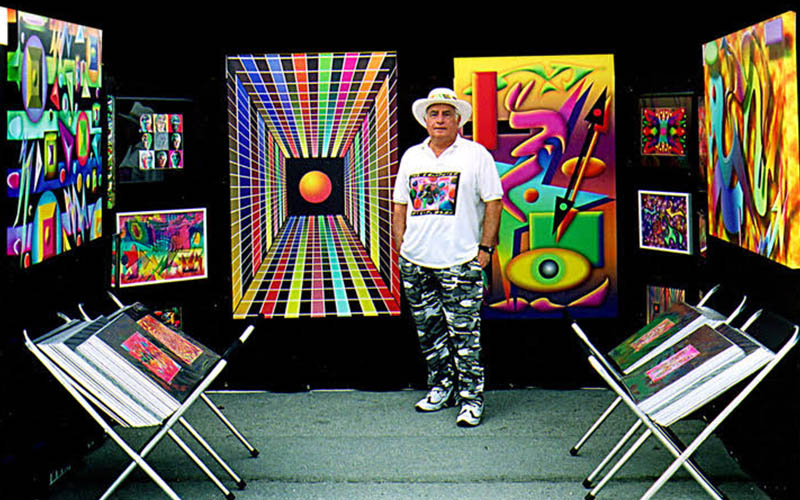 Edward Seeman is an American artist of Polish descent whose works have spanned disparate fields, from award-winning animated television commercials for children. While much of his work has been done in still images (painted drawn and computer-based), the bulk of his work from the 1960s into the 1980s was as an animator, with side projects in film.

His animation attracted attention to him as an artist and in 1981 he won an Emmy award with Ray Favata for his introductory cartoon for The Great Space Coaster, a children's show. His cartoon-commercials also won awards, including ADDYs and Clios. He is also known for his cinemaphotography and for his work with Frank Zappa in the 1960s. He made montage sequences for the feature film. Uncle Meat, as well as Frank Zappa and the Mothers of Invention, which won a Cine Golden Eagle award in 1968.

Since 2010 he has been doing another kind of montage with still images, Fractalegends, showing famous people in different stages of their lives and "presented in their most memorable poses".

Seeman graduated from The High School of Music & Art on 135th Street in New York City, focusing on both singing and art in his studies.

After graduation he worked as a singer in nightclubs and Off Broadway, and also at the Naponoch Country Club in the Catskills. He didn't stop there, but pursued work as an artist, initially creating advertisements for Alexander's, a New York department store. His career came into focus when he was hired at Paramount Pictures, learning the craft of cell animation.

While at Paramount he worked as an inbetweener, a position in which the artist completes the frames in a sequence, between start and end frames drawn by the animator. Another job he worked was as an opaquer on Popeye, painting the back of each frame to add color to the images before they were photographed.

Seeman worked, learning his craft on frames that went into Popeye the Sailorman and Casper the Friendly Ghost. His career was interrupted when Seeman was drafted into the U.S. Army.

Seeman was drafted in the United States Army during the Korean War and served in Frankfurt am Mein, Germany in 1952-1954 with the 4th Infantry Division.[8] While in the division's Headquarters, he served as an Information and Entertainment Non-Commissioned Officer, with the rank of corporal.[9] While there he worked as an illustrator for the 4th Division's newspaper, Ivy Leaves, creating a comic strip, Pvt Goof Hoff (Private Goof Off), part of the Army's internal information program, by which information was distributed in an entertaining way. He also created security adds, designed to remind soldiers that they needed to be conscious of what they said around others in case an enemy was secretly gathering intelligence, a program labeled operations security (OPSEC) today.[8] He also created a book, The Famous Fourth Infantry Division. At his reenlistment, the Army awarded him the Army Commendation Medal for his efforts. He won the "Pat on the Back" award, for the cartoon “A note has just been handed me” which shows a sergeant teaching a class, unaware that his pants are around his ankles; it was serious award for his profession showing merit.[9][10]

Along with his business partner Ray Favata, also an animator, Seeman began the media company Gryphon Productions, which ran from about 1960 to 1969. They produced commercials using cartoon characters. The animations that were produced included Flintstones Fruity Pebbles, Sugar Crisp Cereal (with Sugar Bear), Hasbro Toys' Charmkins and Huggles (from the Great Space Coaster), and My Little Pony, among a much longer list that includes at least 20 different products that advertised using cartoons. After the company closed, Seeman and Favata continued to work together, producing advertisements in the 1970s and '80s.

Unlike other Fractal art works I am creating RORSCHACH TYPE ART THAT ALLOWS THE VIEWER TO BECOME INTERACTIVE WITH THE ART.
My art will look differently with each viewing as new hidden faces and creatures and scenes appear.
What I believe I've achieved is a kind of KINETIC PSYCHEDELIC 2D ART

“FRACTALEGENDS” (Fractal Art+ Legends= Fractalegends)
Ed Seeman has created OVER 1500 living portraits of LEGENDARY PERSONALITIES by montaging many of their famous faces and action shots depicting their illustrious careers at all ages, into ONE ALL ENCOMPASSING PORTRAIT fused together with my FRACTAL ART.
I call these PORTRAIT TRIBUTES “FRACTALEGENDS”. That have been published and sold throughout the internet as T-shirts and Posters.

MY LIFE IN PICTURES